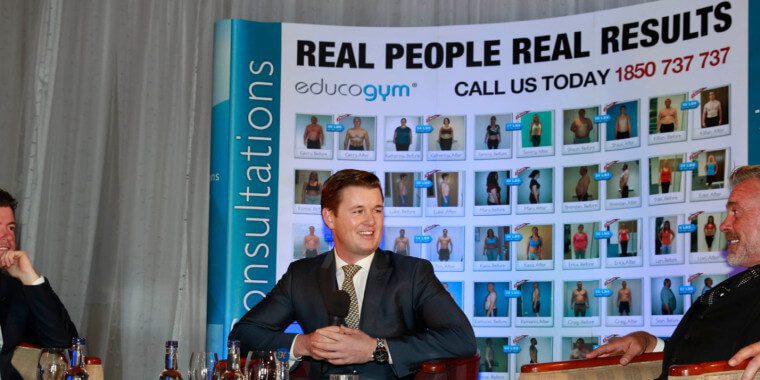 Over 160 people turned out to hear Ryder Cup hero, Darren Clarke speak at an event called, ‘An Audience with Darren Clarke in association with Educogym’. The crowd gathered in the Legacy Suite, the ballroom in the Smurfit Clubhouse and began with a drinks and canapés reception with delicious, light and tasty food served from The K Club’s new K Thai Restaurant. The evening was held to celebrate the gym’s first anniversary at The K Club and included an interview on stage with Darren conducted by CNN’s Shane O’Donoghue who asked him about his amazing career and incredible 4.5 stone weight loss. Video footage showing iconic golfing moments and Darren’s career highlights also played during the evening and guests had an opportunity to hear first-hand what Darren was thinking as he played each memorable shot.

So how did a man allergic to exercise and fond of his Guinness trim down so much?

Darren told the audience that in he had a chance meeting with Jamie Myerscough, CEO of Educogym who chatted to him generally about fitness and told him about the Educogym system.

“I met with Darren at the Darren Clarke Golf Classic in Rockmount Golf Club in September of last year,” last year said Jamie. “I happened to be playing on Darren’s team, representing one of the sponsors, Susan Morrice and Clannah Natural Energy. As we walked down the first fairway, Darren asked me what I did and I told him about Educogym and our fantastic scientific system. He then told me he could do with something like that and I said – I know!” explains Myerscough.”

Shortly after the event, Clarke and Myerscough got together in Clarke’s home in Portrush and planned the following 12 weeks. Darren embarked on the intensive Educogym 12 day program to start with, which is a combination of a low glycemic diet and daily resistance based training for just 20 minutes per day for 12 consecutive days.

“During the initial 12 days I noticed a dramatic change straight away. In fact I was in China before I started and simply adjusting my nutrition caused me to lose weight. That initial weight loss and then the dramatic change during the 12 day program really motivated me to keep going. I’m not a patient guy so if I don’t see results instantly I can lose interest pretty quickly!” says Clarke.

In order to replicate the Educogym system, Clarke and Myerscough installed a home multi gym in the basement of Clarke’s Portrush base. Myerscough explains why this was necessary: “At Educogym our focus is on adding back lost muscle tissue. The reason we do this is because as a person ages they naturally lose muscle, not only from the body they see but also from their vital organs. In fact muscle loss occurs proportionately throughout the body. This obviously affects their health, as weaker ‘vital’ organs such as your heart or liver is not the way to go! Not only does muscle loss affect a person’s health but it also causes their metabolism to slow down. Your metabolic rate is the rate at which you burn food and body fat for energy. So logically if your metabolism slows down, but your food intake remains the same, you will gain unsightly fat where you once had youthful lean toned muscle! Therefore one of the most important requirements of the Educogym system, is that the person must train as intensively as they can manage to add back any lost muscle tissue. The easiest way to do that is with intensive weight resistance exercise! In each Educogym we have our own equipment which we call ‘The Time Machine’. The beauty of the ‘Time Machine’ is that a person can train without resting which the first key component of intensity and each exercise you perform uses weights, which is the second key component. So the equipment that Darren uses is similar to our ‘Time Machine’!”

After the initial 12 Day period, Clarke then continued training for approximately 20 minutes a day for the following 6 weeks and the rapid weight loss continued.

“I honestly couldn’t believe how little effort was involved. I was very focused and extremely motivated. I have a tendency to be an all or nothing type person, so in this case the rapid progress held my interest. When I arrived for the first tour event in South Africa, in January of this year, there were gasps and plenty of jokes surrounding my sudden disappearance!” quips Clarke.

Clarke has kept up the training and has managed to gradually improve his physique to the point where he is at the fittest and lightest he has been for his entire career. Not only are there the obvious health benefits, but he also noticed from his ‘Track Man’, the device that measures all things relating to the golf swing, that his club head speed is around 118 mph showing an increase in strength and flexibility.

“Not bad for 46 is it? The beauty of this system really is in it’s simplicity and it’s brevity! The fact that I only need to train for 20 minutes 3 times a week has meant that I can fit it into my routine. From a nutrition point of view I’ve followed the diet and I take the supplements to maintain my protein levels and therefore my muscle mass as I’ve come to learn it’s the muscle that drives my metabolism. I’m still no angel obviously! I like my pints but it just goes to show how easy it is to stay in excellent shape which you simply learn how!” says Clarke.

But does Myerscough expect Clarke to able to maintain the results? “Like everybody else I’m sure, my original perception of Darren was formed by what I had seen in the media. A fun loving guy, who liked to drink, especially pints, was not fond of exercise and enjoyed to party. That perception was pretty much smashed when I started working with him as I found him to be ultra focused, driven and hard working. Exactly what I would expect of a professional sports person and a successful one at that. To motivate anybody to make a change in their life, you must install a vision of the end outcome and that has to be appealing to the person. This was easy for Darren as he is very result orientated, probably due the nature of his work. I think that is what sets Educogym apart though. We train our staff to install that vision. In the end I think that’s what makes the vital difference if you want to achieve results. I wish all our clients had the mental capacity that Darren exhibits!”

If you want to walk in the footsteps of Darren Clarke and slim down, get fit and strong then call Educogym on 01 2752000 or log on to www.eduogym.com.

We use cookies on our website to give you the most relevant experience by remembering your preferences and repeat visits. By clicking “Accept All”, you consent to the use of ALL the cookies. However, you may visit "Cookie Settings" to provide a controlled consent.
Cookie SettingsAccept All
Manage consent

This website uses cookies to improve your experience while you navigate through the website. Out of these, the cookies that are categorized as necessary are stored on your browser as they are essential for the working of basic functionalities of the website. We also use third-party cookies that help us analyze and understand how you use this website. These cookies will be stored in your browser only with your consent. You also have the option to opt-out of these cookies. But opting out of some of these cookies may affect your browsing experience.
Necessary Always Enabled
Necessary cookies are absolutely essential for the website to function properly. These cookies ensure basic functionalities and security features of the website, anonymously.
Functional
Functional cookies help to perform certain functionalities like sharing the content of the website on social media platforms, collect feedbacks, and other third-party features.
Performance
Performance cookies are used to understand and analyze the key performance indexes of the website which helps in delivering a better user experience for the visitors.
Analytics
Analytical cookies are used to understand how visitors interact with the website. These cookies help provide information on metrics the number of visitors, bounce rate, traffic source, etc.
Advertisement
Advertisement cookies are used to provide visitors with relevant ads and marketing campaigns. These cookies track visitors across websites and collect information to provide customized ads.
Others
Other uncategorized cookies are those that are being analyzed and have not been classified into a category as yet.
SAVE & ACCEPT